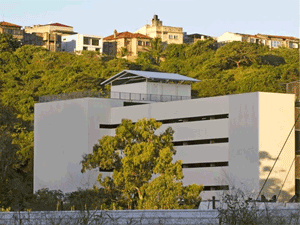 Located in central Maputo, the deployment consists of three 42 sqm eCentre units and houses mission critical data and telecom equipment for Vodacom Mozambique. The eCentre is a pre-fabricated, pre-equipped, modular data centre solution that is optimised for energy efficiency and low TCO. It is specifically designed to be fast to deploy and fully future proof.

“Speed and modularity was essential for this deployment, since the data centre is located on the roof of an existing building”, said David King, CEO, Flexenclosure.

"We needed to put this facility in place quickly, efficiently, on time and to a very high quality," said Jerry Mobbs, Managing Director, Vodacom Mozambique. "Flexenclosure de-risked our project significantly because the detailed technical work was all done in a clean environment in Sweden and the amount of civil work needed on site was minimised.  By putting the facility in place, if we do have an outage our customers won’t notice it as it gives us a level of backup that we did not have before.”

The first eCentre was installed in Nigeria in 2001, and since then Flexenclosure has deployed them in West, Central, North and now Southern Africa.

Mozambique’s annual growth rate is approximately 8%. The mobile communication penetration rate is still well below the African average at approximately 39%.